Get in Touch Now!

Zariki pre and primary school was founded in 2009 with the effort of Justine Mtalingi who had the idea of having the school in the village. Samson Aswan and Michael Odero joined Justine as founders of Zariki.

This was after seeing children walking 9km each way in search of education. Very few children even made it to school.

Justine, Samson and Michael were three of only five English speaking residents of the village in 2009. They had learnt English after completing their education (with the support of the area chief), teaching and working in tourism in Arusha a 9-hour bus ride from the village.

The area chief and villagers also saw the importance of having a pre and primary school in Mwaburugu.

The school started with 9 children learning under a tree beside Lake Victoria.

The founders and village leaders believe that in order to secure good jobs and to progress, a sound knowledge of English is essential. So the language of instruction at Zariki is English and as a result of this the school receives no government support.

To support the school the three founders conduct boat rides and tours of the village for visitors coming to see Lake Victoria. Most visitors are foreigners staying in camps in the nearby Serengeti national park.

Fees are not charged for children from the village of Mwaburugu but parents may if they have the resources make donations in kind, generally of food. Parents of children from other villages are required to make payments in kind of food. Zariki provides all students with two meals a day.

Since 2009 Justine has been working with Michael Odero and Samson Aswan in setting the vision for the school and running the school while raising funds both to operate the school and expand facilities to meet the needs generated by rapid and successful growth.

In 2010 a family from the USA came to tour Lake Victoria and was led by Justine on a tour of the village. Upon seeing the need for education, the family decided to support the village with three classrooms, two offices and a kitchen.

Justine decided to name the school after the family members that provided the initial funding, Zarah, Richard and Kim: ZA for Zara, RI for Richard and KI for Kim. Hence ZARIKI.

Many other smaller donations including desks, computers, iPads, teaching aids, sports equipment and cash to cover operating costs have been made by visitors over the years. Most visitors have also made purchases of village made items from the school handicraft shop.

Zariki desperately needs donations of $US15,000 to complete the half built dining room and kitchen, a further $US5,000 for furnishings etc. and $US25,000 to build a fence around the school to improve safety and security.

In 2018 all 10 Zariki students successfully completed the national grade 7 examination and 9 went on to the secondary school in Lamadi village 9km away. In the first year of eligibility for the grade seven examination ZARIKI placed 1st in the district, 1st in the province and 12th out of 1760 similar sized schools in Tanzania. Zariki is grouped with schools with less than 40 students in the graduating class.

Of the 2018 graduates who qualified to enter the secondary school in the village of Lamadi, accessed by bike or walking, 3 are currently placing first, second and third out of the 48 students in their year group.

In 2019 all 10 Zariki students successfully completed the national grade 7 examination and all had A grades in every subject. Four (40%) of the 10 students (2 girls and 2 boys) have been awarded places/partial scholarships to prestigious Government boarding schools (nationwide approximately 10% of all graduating year 7 students (some 933,000 of whom about 760,000 (81.5%) graduate) receive such offers) and the other 6 students have places at the government secondary school in the village of Lamadi.

These results in 2018 and 2019 are a testament to what can be achieved amongst first generation school students with good facilities, inspired leadership and outstanding teaching.

In 2019 ZARIKI had 441 students who worked hard to achieve great results so that they can could progress to secondary school and beyond.

Following the opening of the Henry House dormitory in July 2019 to date 75 students have been enrolled as boarders and total enrolments stand at 541. Further enrolments are expected before the March 2020 closing date.

The main aim of ZARIKI is to transform the village from one of nearly all illiterate adults and children to one with 100% literacy and fluency in spoken and written English and Swahili. This will provide the educational background to facilitate successful participation in higher education so all from the village have the education, skills and confidence to develop successful careers after completing secondary school and, in some cases, university education.

Zariki operates on a limited budget, receives no government support and relies almost entirely on donations from visitors to the shores of Lake Victoria most of whom are also visitors to the Serengeti. Recently visitor numbers have fallen as the Serengeti National park authorities charged those leaving the Serengeti on day trips to Lake Victoria double the normal daily fee of $US72. Representations have been made by Zariki to change this and it is hoped that the double charging will be eliminated saving $US72 for each visitor.

Zariki costs $US66,000 per annum or $US5,500 per month to run with no salaries at all being paid to Justine, Samson and Michael: 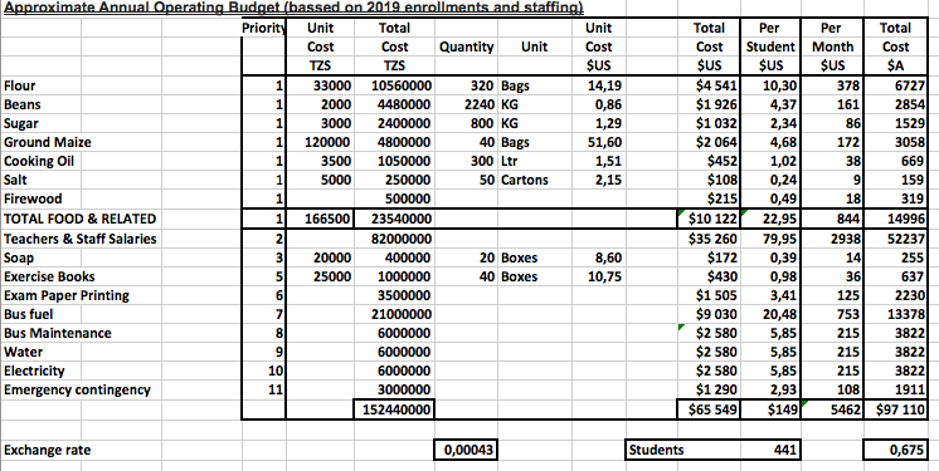 Further, there is an urgent need for investment of a further $US78,000 ($A117,000). After completion of the dining hall, kitchen and safety fence (mentioned above) the major items required to be funded are:

WHAT ZARIKI NEEDS IN THE MEDIUM TERM

Once Zariki secures adequate recurrent funding and donations to fund its capital needs the founders would like to establish a polytechnic to provide post-primary and post-secondary school education in essential trades such as metal working, carpentry, mechanics, metal working, weaving, wiring, sewing, tailoring and hotel management. This education would be provided on a site over the road from Zariki and would be charged for on a full cost recovery basis. As with Zariki pre and primary school the goal of providing the technical education is to equip the villagers and others (both English speaking and those who only speak Swahili and other local languages) the ability to get meaningful employment and develop careers. The estimated cost to establish the technical school is $US80,000.

DONATIONS MUST BE DENOMINATED IN $US

"In just eight years...
Learn More
Call our local representative in your country, please look for your local no. on our contact page.
Contact Us Now